Rodeo producer throughout the Rocky Mountain region for 27 years, Leo Cremer established the greatest string of bucking horses ever assembled under a single ownership. So deep was the talent of his horses that many of them never bucked more than once or twice a year. Born in 1891, Cremer got into the rodeo business after moving west to homestead as a young man. He began supplying draft horses to Wisconsin farmers, and with the outlawed horses that couldn’t be trained, he held local impromptu bucking horse contests that started his rodeo business. His most famous broncs were Mexico, Peekaboo, Will James, Madam Queen, Come Apart (inducted in 1979) and Hoochie Coochie. Cremer was killed in a stock-truck accident on Nov. 28, 1953. His business became part of the World Championship Rodeo Company owned by film, radio and television star Gene Autry. 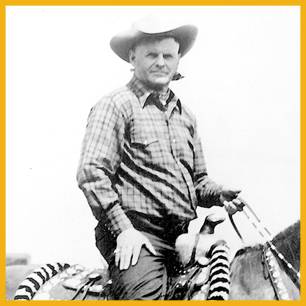