Sports fans knew Gene Autry as the owner of the California (now Anaheim) Angels baseball team and the former Western movie and singing star who once played semi-pro baseball. But few are aware of his longtime involvement in professional rodeo. In 1942 Autry, at the height of his screen popularity, had a string of rodeo stock based in Ardmore, Okla. A year later he became a partner in the World Championship Rodeo Company, which furnished stock for many of the country’s major rodeos. In 1954 he acquired Montana’s top bucking string from the estate of Leo J. Cremer, Sr. and put Canadian saddle bronc riding champion Harry Knight in charge of the operation. A merger with the World Championship Rodeo Company in 1956 made Autry the sole owner.  He moved the entire company to a 24,000-acre ranch near Fowler, Colo., with Knight as the working partner in the operation.  For the next 12 years they provided stock for most of the major rodeos in Texas, Colorado, Montana and Nebraska.  When the company was sold in 1968, both men continued to be active in rodeo. Autry died Oct. 2, 1998. 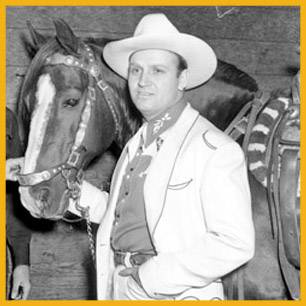