Chandler Earl (Feek) Tooke started raising horses on the family’s Ekalaka, Mont., ranch in the late 1930s and the breeding program he created with his son, Ernest, produced more then 6,000 rodeo broncs, passed along to every top stock contractor in North America. Described as the “Henry Ford of his industry,” Tooke pioneered a bucking horse breeding program that matched registered Shire stallions with cross-bred mares. The foundations of the Tooke bloodline were Prince, Timberline, Gray Wolf, Snowflake and the 1,875-pound General Custer. “Without the Tooke stallions where would rodeo be today?” said Hall of Fame announcer and former NFR general manager Clem McSpadden. ”They kept alive the tradition of great bucking horses which are the backbone of rodeos in Canada and the United States.” Since 1987m the majority of National Finals Rodeo champion broncs and PRCA Bucking Horses of the Year award recipients have been genetically linked to the Tookes’ program, including Angel Blue, Spring Fling, Air Wolf, Comotion, Guilty Cat, Bobby Joe Skoal, Challenger and Cloud Gray. Tooke died at the 1968 NFR in Jim Norick Arena of a heart attack just after accepting the plaque honoring his Sheep Mountain as the Best Saddle Bronc of the previous year’s championships. 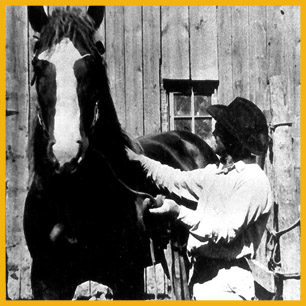