One of only three men to have won four or more steer wrestling world titles, James Bynum of Waxahachie, Texas, pursued world titles if the weather wasn’t just right. “Big Jim,” like his father before him, farmed cotton south of Dallas. When it was hot and dry, that usually meant a poor crop, so he would load up his horse and hit the road. The good years he spent close to home, taking care of the cotton. His claim is born out by the gaps between his titles: 1954, 1958, 1961 and 1963. Born in Danville, Ala., in 1924, Bynum was a pencil-thin 130 pounds until his late teens and first tried his hand at tie-down roping. An older friend suggested he try steer wrestling, and he placed on the first steer he ever jumped at. After a two-year Army stint (1945-47), Bynum spent another two years apprenticed to the late Todd Whatley, the 1947 world steer wrestling champion. At 6-foot-3 and 250 pounds, Bynum always was careful when picking his steer wrestling mount. The best he ever owned was a gray Quarter Horse registered as Star Web that Bynum called Ol’ Blue. Blue retired to the Bynum farm to spend out his last days. Bynum died of cancer on May 28, 1999. 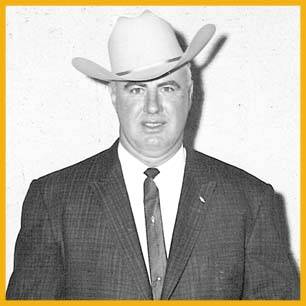