Hugh Bennett influenced the sport of rodeo in and out of the arena. Bennett, born Sept. 19, 1905, in Knox City, Texas, won the steer wrestling world title in 1932 and the steer roping title in 1938. He became the first secretary/treasurer of the Cowboys’ Turtle Association, serving from October 1936 until 1941. All the while, he continued to compete and with the help of his wife, Josie, ran the office from the trunk of his car. A powerful voice in the administration, Bennett was very influential in the ascension of the Turtle Association that later became the Rodeo Cowboys Association and eventually the Professional Rodeo Cowboys Association in 1975. Forty-three years after the Cowboys’ Turtle Association was formed, Bennett remained active in professional rodeo and was a founder of the Hall of Champions in Colorado Springs, Colo. Bennett died July 15, 1994. 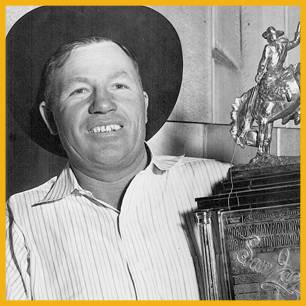