Gene Ross, born Jan. 23, 1904, in Sayre, Okla., was known as a good bronc rider and tie-down roper, but his best event was steer wrestling. He won the world steer wrestling title in 1929, the first year “official” championships were awarded. He started his career in 1922 in Comanche, Okla., and went on to become a familiar sight at Boston Garden, Madison Square Garden, Chicago, Houston and Los Angeles. In 1934 he was part of Tex Austin’s troupe that sailed to England to perform for King Edward VIII. His horse, Chico, recalled by some as one of the best steer wrestling mounts of any era, traveled with the troupe. Ross retired from competition in the early 1940s. He died Feb. 16, 1988. 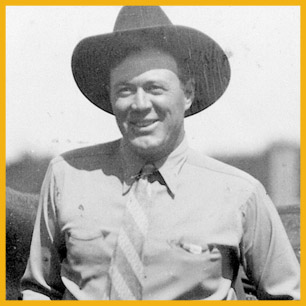