Born May 13, 1933, in Rockhand, Idaho, Robinson has been a big influence in the sport of rodeo. He joined the PRCA in 1958 and competed at both ends of the arena as a steer wrestler and a saddle bronc rider.

He competed professionally for 14 years and in 1980, he became one of the first pro officials for the PRCA. In September of 1982, he became the PRCA’s director of rodeo administration, and he and his wife, Emma, moved from Idaho to Colorado Springs. During that time, his responsibilities included negotiating prize money with rodeo committees, overseeing the eligibility of cowboys, interpreting and enforcing PRCA rules and coordinating rodeo listing and approvals.

He was also instrumental in moving the NFR from Oklahoma City, Okla., to its current location in Las Vegas, Nev., in 1985.

Robinson, who now makes his home in Hagerman, Idaho, has two kids, Ange and Jade. His son, Jade, followed in his footsteps by serving as a pro official for more than 19 years, working every NFR during that time. He recently retired to run a steakhouse in his hometown of Pendleton, Ore. 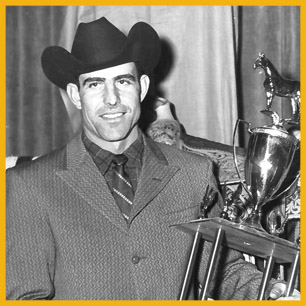