Although he achieved great fame as a tie-down roper, Olin Young won two world titles in steer roping. A superb all-around athlete, Young approached everything he did with the skill and technique of a craftsman, even when he was building corrals. Most of Young’s competitors believe he would have won several more championships had he traveled more on ProRodeo’s steer roping circuit. Also, in 1971, Young became the first to win four aggregate titles in tie-down roping at the National Finals Rodeo, which has since been matched by Joe Beaver (1996), Roy Cooper (1999) and Fred Whitfield (2002). He was New Mexico’s Athlete of the Year in 1970. He was born Sept. 11, 1936, in Lovington, N.M. 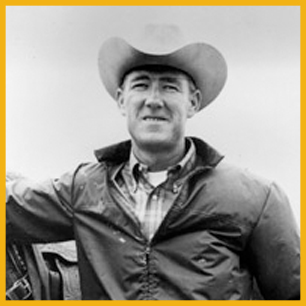