For more than 15 years, Everett Shaw was the man to beat in single steer roping. Between 1945 and 1962 he won a record six world championships. Shaw, born June 7, 1908, in Hog Shooter Creek, Okla., was “discovered” by Dick Truitt, who later became his brother-in-law. A fine tie-down roper in the early days of his career, Shaw learned to rope steers on the circuit with Truitt, the 1939 world champion. Shaw won two legs on the Sam Jackson all-around cowboy trophy at the famed Pendleton (Ore.) Round-Up. The best known of many good horses used by Shaw during his career was Peanuts, on which he won most of his championships. One of the original Turtles, membership number 7, Shaw served in the Cowboys’ Turtle Association and the Rodeo Cowboys Association for 20 years. He died November 1979. 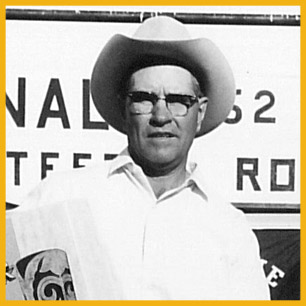