Sharkey Irwin, a nephew of famous stock contractor and rodeo producer C.B. Irwin, grew up in the rodeo business and earned three world titles. In 1925 he earned his first ProRodeo victories in Laramie, Wyo., in saddle bronc riding and tie-down roping, as well as winning in both of those events in Rawlings, Wyo., and claiming the all-around title in Colorado Springs, Colo.  In 1926, Irwin was the world champion saddle bronc rider, as determined in Pendleton, Ore. One year later, he claimed the world bull riding crown, which was determined in Idaho Falls, Idaho. In 1928 Irwin won the first all-around cowboy title ever awarded at Cheyenne (Wyo.) Frontier Days, which also was designated as a world championship. Fifty years later, Irwin was still competing and winning, taking a team roping contest in Cañon City, Colo., in 1978. Irwin was born Aug. 4, 1899, in Clark, Colo., and died in 1984. 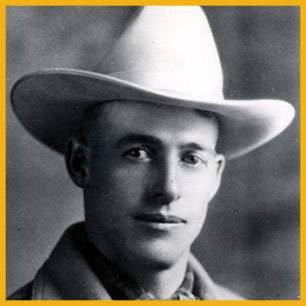 *Prior to 1929 many regional rodeos proclaimed their event to be world championships, sometimes legitimately, according to the Rodeo Historical Society.