The first contestant from outside North America to be inducted into the ProRodeo Hall of Fame, Glen O’Neill was the saddle bronc riding champion of his native Australia before moving to Canada as a teenager and establishing himself as an elite competitor for more than a decade, capped by winning the world championship in 2002.

O’Neill was the 1994 PRCA Resistol Saddle Bronc Riding Rookie of the Year and then qualified for the first of his 11 National Finals Rodeos a year later. Eight times he finished among the top five in the world standings, going head-to-head with fellow Hall of Famers Billy Etbauer and Dan Mortensen all through his career, and earned $1,614,860.

O’Neill captured the NFR average title on his way to the 2002 gold buckle and was reserve world champion in both 2001 and 2003, finishing less than $5,000 behind Mortensen in his title-defense year.

“One of the things that gives me the greatest joy is to think about where I started and how far I have come, as far as rodeo and in life, moving halfway across the world and making this life for myself,” O’Neill said. 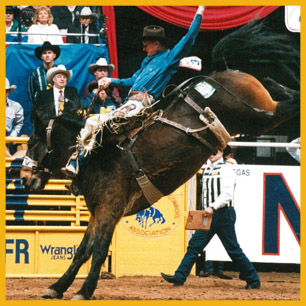