In 1923, brothers Henry and Earl Tackett – just back from the wilds of Wyoming – decided to entertain visitors attending the Old Soldiers Reunion in Sidney with some real Western-style action. A circle was formed with Model T cars and makeshift fencing, and the Tacketts spent the afternoon endeavoring to master wild horses for the sum of $50 and more bruises than they could count.

Sidney Legion Post 128 quickly assumed sponsorship of what would become Iowa’s Championship Rodeo and made it an annual event open to the public with a small grandstand and no admission charge. Committee members went each year to South Dakota to buy bucking broncs, and bulls were bought from Texas and Mexico. Several quarter horses were owned by the Legion and kept in Sidney all year.

Within five years, attendance grew so much that a small admission was added, a larger grandstand built, professional cowboys began to compete and some trick riders and animal acts were added. Early rodeos included the appearance of Indian tribesmen in full native dress, sometimes from the Rosebud Reservation in South Dakota. In 1931, lights were added to the arena and night shows started. After 1952, the livestock was brought in by professional contractors, who furnished top-grade stock to work at each performance.

The 21st-century incarnation of the rodeo has one of the finest arenas in the country with on-site parking, new pens and gates, hospital facilities, concessions, flea market, carnival and covered concrete grandstands. Sidney’s population of 1,150 hosts more than 38,000 visitors during the five days of Iowa’s Championship Rodeo.

In 1996, the rodeo was declared an official Iowa Sesquicentennial event with the Friday afternoon performance being dedicated to that celebration of 150 years of statehood. A year later, Iowa’s Championship Rodeo was selected as the PRCA Small Rodeo Committee of the Year, a great honor in the event’s 75th anniversary year. 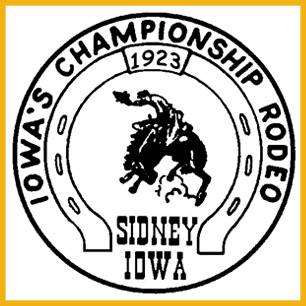