The Greeley Stampede, created in 1922 as a tribute to local potato farmers – a one-day event with total attendance of 2,500 – has grown into an internationally-acclaimed celebration of Western heritage that runs nearly two weeks and attracts more than 450,000 people annually to Northern Colorado from all over the United States and several foreign countries.

It is the community’s biggest event, evolving and growing in each stage from the Greeley Spud Rodeo to the Go West with Greeley Rodeo in 1949 (based on city founder Horace Greeley’s admonition to “Go West, young man”), the Greeley Independence Stampede in 1972 and then, after a two-year interlude as the Rocky Mountain Stampede (2003-04), the Greeley Stampede again.

It has long been one of the biggest rodeos during the Fourth of July run known as Cowboy Christmas, earning coverage on national network television, and has been widely honored for the excellence of its production. The Stampede was named one of the Bicentennial Local Legacies by the Library of Congress and has been awarded the International Festivals and Events Association Grand Pinnacle Gold Award. 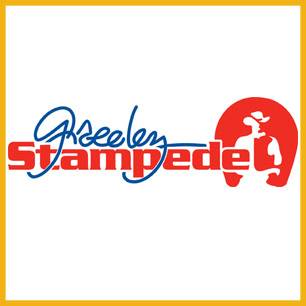