A tiny lady bronc rider from the Nebraska sand-hill country, Tad Lucas was the youngest of 24 children born to a pioneer family. She rode bulls in the main streets of Cody, Neb., during World War I to raise money for the Red Cross. In 1921, Lucas spent three months in Mexico as a bronc rider with California Frank’s Rodeo Co. In 1922, she met Buck Lucas, and two years later, they were married. She added trick riding to her repertoire and went to London’s Wembley Stadium with the Tex Austin Rodeo. She rode for several years in the C. B. Irwin rodeos, riding relays and pony express races, saddle broncs and trick riding. Trick riding was a contest event in the 1920s and Lucas won the event at the Cheyenne (Wyo.) Frontier Days eight consecutive times. At the 1933 Chicago World’s Fair, her arm was crushed while trick riding, but three years in a cast didn’t stop her. She rode her last bucking horse in 1964 at the age of 62. She served many years on the PRCA Board of Directors and the board of the Rodeo Historical Society. Lucas died Feb. 23, 1990. 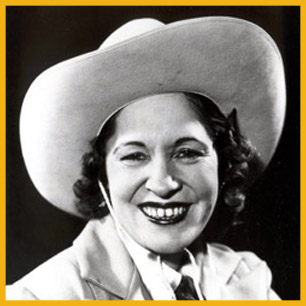