A love of horses and the cowboy lifestyle marked Malcolm Baldrige’s life. Born Oct. 4, 1922, in Omaha, Neb., Baldrige was a confirmed cowboy by the age of 7. At 20, he already had spent six summers working as a cowboy for a dollar a day and room and board. Education and World War II took him from the range. Mac roped in amateur competitions in the 1950s while beginning a successful business career. In 1969 he became an RCA member and went on to win team roping events in New York, Michigan and California. He was a familiar face in Denver, whether roping at the National Western or meeting with the RCA Board. Mac was known as a strong competitor who never had trouble finding a partner. As chairman of Scovill Industries from 1962-1980, he increased company sales to more than $1 billion. Business and rodeo took a back seat in 1981 when Baldrige was appointed U.S. Secretary of Commerce, a job he held from 1981-87. Baldrige’s philosophy was simple, and he lived it in his business, political and rodeo careers: “Success is finding something you really like to do and caring enough about it to do it well. Sticking your neck out if you’re sure you’re right and getting lucky.” Baldrige was the PRCA’s Rodeo Man of the Year in 1981. He died July 25, 1987. 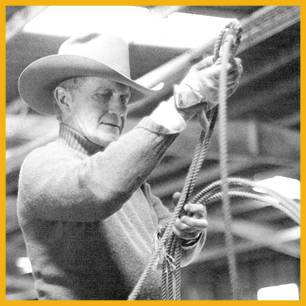