Although he never cashed a go-round check, Dr. J. Pat Evans has left an indelible mark on ProRodeo that any world champion would envy. As co-founder of the Justin Sportsmedicine Team in 1980, Dr. Evans has undoubtedly helped thousands of cowboys by providing medical attention. First-class medical care at more than 150 rodeos across the United States and Canada, along with a spider web network of physicians and therapists, have put ProRodeo on the same playing field as other professional sports. Evans, who had a private practice in Dallas, worked as the team doctor for the Dallas Cowboys and Dallas Mavericks in the 1970s and ’80s. He presented his idea of rodeo health care to athletic trainer Don Andrews, who was helping him treat cowboys during a 1979 competition titled Rodeo Superstars. Evans told Andrews it was a shame that guys in rodeo didn’t have the same type of treatment options as athletes in other sports. Andrews agreed and with the backing of John Justin Jr. and the blessing of the PRCA, the Justin Sportsmedicine Team was born at the 1980 National Finals Rodeo in Oklahoma City. Dr. Tandy Freeman, who continues to carry the torch for the Justin Sportsmedicine Team since Evans’ retirement, considers Dr. Evans a mentor and hero. 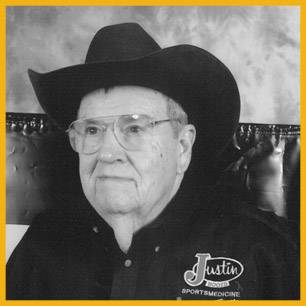