Dave Stout’s dedication to professional rodeo began in 1937 when he became the 38th member of the Cowboys’ Turtle Association. Born June 18, 1908, Stout competed in tie-down roping from 1930-50. In 1960, he became the director of the Rodeo Cowboys Association’s (RCA) Information Foundation. He was the editor of the association’s newspaper, Rodeo Sports News, from 1967-69. From 1969 until his alleged retirement in 1974, Stout was the secretary-treasurer for the association. “Dave worked 24 hours a day, seven days a week, never took a vacation and turned in expense accounts that would make Scrooge look like a bandit,” said a PRCA Board member. For his contribution to ProRodeo, the International Rodeo Management (IRM) organization named him Rodeo Man of the Year in 1974. IRM President George Solari said, “His contribution to rodeo and his energetic work for PRCA mark Dave Stout as a man dedicated to advancing rodeo as a professional sport.” Returning frequently to the PRCA offices as a consultant and to write the history of ProRodeo in 1978, Stout was also the first recipient of the Rodeo Sports News’ Frontier Airline Award for his outstanding contribution to ProRodeo. Stout’s work is evident in the Hall ,where he participated in the planning, collection and documentation of the exhibits. He died Oct. 1, 1990. 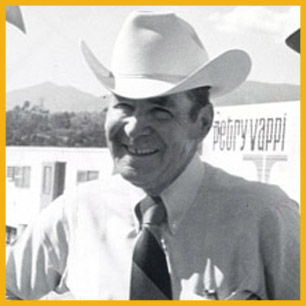