No one in the history of the National Finals Steer Roping has announced the event more times than Clem McSpadden. McSpadden of Chelsea, Okla., has announced the NFSR 27 times, starting in 1963 with his last coming in 2000. Born Nov. 9, 1925, in Busyhead, Okla., McSpadden has announced rodeos across the United States and Canada, including the Calgary Stampede and the Canadian Finals Rodeo, where he was the first American to announce at those events. In 1986, he was named PRCA Announcer of the Year and Cowboy Hall of Fame Rodeo Man of the Year. McSpadden also served as president and board member for the Rodeo Cowboys Association. He was general manager of the National Finals Rodeo for 18 years while it was held in Oklahoma City. An Oklahoma state senator for 18 years, McSpadden served as president of that body twice and is a former member of the U.S. Congress. 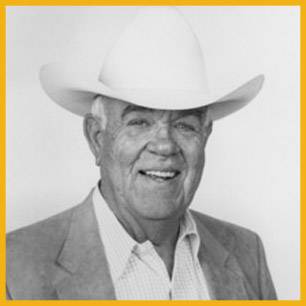