Buster Ivory, who got his start as a cowboy, went on to be well-known for his efforts in the management and administration of ProRodeo. Born Aug. 9, 1923, in Alturus, Calif., Ivory’s first rodeo was in McArthur, Calif., in 1937. According to Ivory, “It wasn’t much of a rodeo, but I was only 14.” He hit the rodeo circuit in 1940, competing in saddle bronc riding, bareback riding, bull riding and occasionally team roping. As time moved forward, he concentrated on saddle bronc riding and bareback riding. Several severe injuries curtailed Ivory’s participation as a contestant, but opened new avenues in management and production. He served as secretary-treasurer of the Rodeo Cowboy Association (the forerunner to the PRCA) from 1953-56. He served a record 26 consecutive years as livestock superintendent at the National Finals Rodeo and was the NFR chute boss for three years. In 1958 he served as livestock superintendent for the World’s Fair American Wild West Show and Rodeo in Brussels, Belgium. He was the chute boss and livestock superintendent at the 1967 World’s Fair Rodeo in Montreal and was the general manager of the Rodeo Far West, which toured four European countries. In 1978, he was voted rodeo fans’ Man of the Year. “The most rewarding thing is all the friends you make. I’ve been fortunate to meet people all over the world,” said Ivory. He died March 10, 2003.  His wife, June Ivory, was inducted into the ProRodeo Hall of Fame on Aug. 14, 2004. 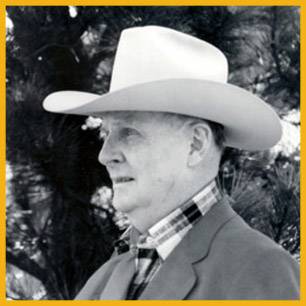