In the late 1920s, Bob Crosby realized that he could make a living as a rodeo cowboy. Crosby, born in 1897 in Midland, Texas, won his first rodeo title at the age of 13. With the encouragement of Will Rogers, he entered the bigger rodeos in Cheyenne and Pendleton. After establishing a ranch of his own in New Mexico, he depended on his winnings to keep his ventures going. At first, he entered every event, but later he concentrated on the timed events. In 1925, he won the Roosevelt Trophy, presented to the all-around cowboy at both the Cheyenne Frontier Days and the Pendleton Round-Up. After winning both rodeos again in 1927-28, he gained permanent possession of the trophy. Crosby’s trademark was a black hat that he felt was a symbol of good luck. Crowds came to recognize his old battered hat and would cheer as he approached the arena. He once stated, “Someday, to their surprise, I’m going to wear my Sunday hat and see if it’s the old black felt or the man they’re always cheering.” He died Oct. 20, 1947. 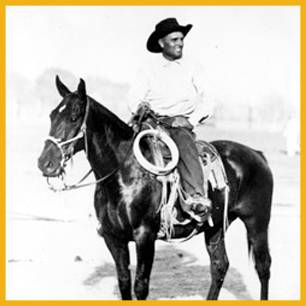