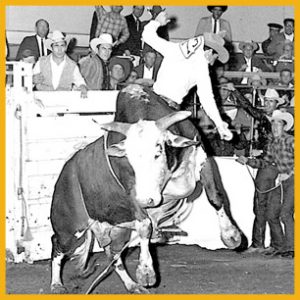 During a 14-year period, Tornado, a Hereford-Brahma cross-breed, bucked off every cowboy – all 220 of them – who tried to ride him.  Owned by legend Jim Shoulders, the 1,800-pound bull met his match, however, at the 1967 National Finals Rodeo where he was paired with ProRodeo Hall of Famer Freckles Brown. Brown, the 1962 world champion, was 46 years old at the time and still riding better than cowboys half his age. At the end of eight seconds, Brown had broken Tornado’s streak. Applause for both man and bull reportedly shook the rafters. Shoulders said, “If anyone ever rode this bull, I’d rather it was Freckles.”  Tornado was retired in 1968, and Freckles retired from competition in 1974.