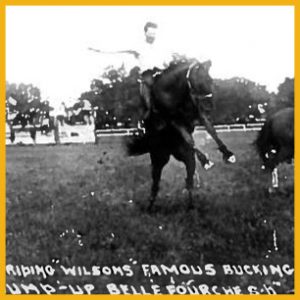 Tipperary was credited with dumping 80 riders before Yakima Canutt made a qualified ride in 1920. Canutt also rode the famed bronc a second time in Belle Fourche, S.D., in 1921. The colt, which hailed from a band of thoroughbreds in the Northwest, first gained attention at the World War 1 boomtown of Camp Crook, S.D., a center of European military horse buyers and bronc riders who rode each horse before it was sold. The English rejected the colt because it bucked off all riders, and the Italians passed it by because it was a pacer. A saloonkeeper, who won the horse in a poker game, won a fast $500 when he bet that a local bronc rider couldn’t ride the horse.  The crestfallen cowboy sat in the dust singing, “It’s a long way to Tipperary,” a popular song of the period. The name caught on and Tipperary began a bucking career that lasted until 1928.