Make It Do “Peanuts” 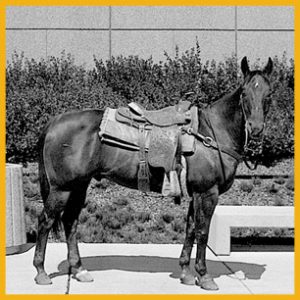 1977 was the first year that a trophy was awarded to the season’s best steer wrestling horse by vote of the top 30 money winners in the event. Their choice in 1977-78 was a bay gelding named Peanuts, owned by C.R. Jones of Lakeside, Calif. Purchased off the Quarter Horse race track in 1968, the 4-year-old Peanuts, registered as Make It Do, had an enviable record down the straightway. He once won nine of 11 races at Los Alamitos, taking five of them in a row. There have been many great money-winning steer wrestling horses, Everett Bowman’s bay Coon Dog, Dave Campbell’s sorrel Laddie and Walt Linderman’s stout-hearted Scott to name a few. However, until steer wrestler and roper Corky Warren established a perpetual trophy in memory of his wife Sharon, there was no official recognition of great steer wrestling horses.