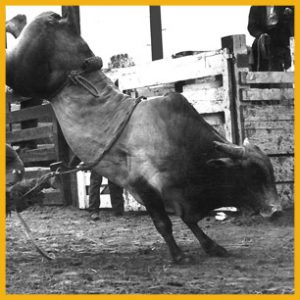 In Oscar’s first five years as a bucking bull, more than 100 cowboys tried to ride him and every one of them failed to make the eight-second horn.  A bronze “Oscar” was offered by owner RSC (Rodeo Stock Contractors) to the first man to ride him. The trophy wasn’t collected until 1975 when John Davis made it to the whistle. Oscar, unlike many great bucking bulls, was small, weighing about 1,300 pounds. His bucking style was characterized by a violent spin to the left. Earlier in his career, he tried to hook a thrown rider, but later he usually ignored them. Only a handful of cowboys made an eight-second ride on Oscar, among them Randy Magers, Jerome Robinson, Allan Jordan, Guy Barth and Don Gay. Magers and Jordan rode Oscar twice. Gay rode him three times. At the Grand National Rodeo in San Francisco, Gay and Oscar produced a 97-point ride. At that time the score was a world record for any PRCA bucking stock. The ride won the event for Gay and earned him the PRCA bull riding championship. In 1978 Jordan’s ride on Oscar earned them a 96. Oscar retired to the ProRodeo Hall of Fame, where he remained until his death in 1983.