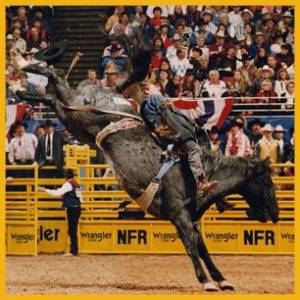 Powder River Rodeo owners Hank and Lori Franzen credit Khadafy Skoal with putting their company on the map, helping a relatively new stock contracting firm establish itself in the PRCA after buying him from Ray Sanborn in 1989 as a 6-year-old.

“He was electric, he was different, he was amazing, and people wanted to see him,” Lori Franzen said. “Hank and I owe an enormous amount of our success to him.”