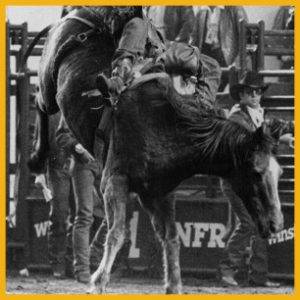 A direct descendent of the legendary race horse Man O ’War, High Tide was a part of the Flying U Rodeo Company until he was 38 years old, the equivalent of 105 human years. He made his first trip to the National Finals Rodeo in 1967 and was selected 20 more times, far outdistancing his equine counterparts. He was named the top bareback horse of the 1975 NFR and, appropriately, was retired at the 1986 NFR. High Tide was known for consistency and altitude. He was also a television star, twice appearing on Ripley’s Believe It or Not because of his longevity and continuing success in the rodeo arena. The horse was described by his human athletic competitors as “one in a million.” High Tide died Aug. 5, 1987, and was buried at Cotton Rosser’s ranch in Marysville, Calif.