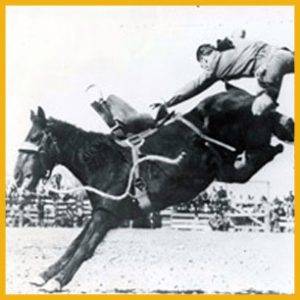 Five Minutes to Midnight began life with the name Tumbling Mustard. Although he was smaller, his twists and plunges led to his often being confused with the renowned bronc of the day, Midnight. When people asked, “Is that the horse Midnight?,” the usual answer was, “Darn close to it!”  Five Minutes was close enough and that’s how the horse made rodeo history with a new name. Peter Welch and Strawberry Red Wall, producers of Canadian rodeos in the 1920s, already owned Midnight, and they acquired the smaller horse from the Sarcee Indian Reservation. Col. Jim Eskew, a noted New York producer, had seen both of them perform and picked them up at a sheriff’s sale when the Canadian outfit was dissolved. It was not until the pair of blacks was sold to Verne Elliott and Ed McCarty that Five Minutes to Midnight bucked his way to real fame. Little Five continued to turn back and cut figure eights long after Midnight retired. In 1946, Five Minutes to Midnight retired, and he died in July 1947.