His peers, professional rodeo cowboys and audiences across North America considered Wick Peth to be the greatest rodeo bullfighter of all. Making no attempt to be funny, his costume was more functional than clownish. Born on April 15, 1930, in Mount Vernon, Wash., Peth was a one-time contestant and, with his father and brothers, a one-time rodeo stock contractor. Peth, an outstanding athlete, began fighting bulls as a test of his athletic prowess. At age 48 he told a writer that he was a better athlete then than he had been 10 years earlier, and proved it by working bulls with skill, courage and finesse. Time after time he demonstrated his ability to shrug off the painful results of devastating hits from those rare bulls that got to him. By the end of 1978, he had been elected bullfighter for the NFR seven times; the only reason he didn’t make it every year was to give the other guys a chance at the job. 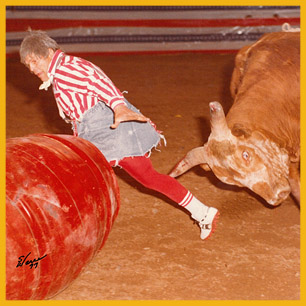