Tom Hadley never planned to be a rodeo announcer. His career goal was to be a rodeo cowboy. During his competitive years, he entered bull riding, bareback riding, saddle bronc riding, tie-down roping and team roping. Born Oct. 6, 1927, in Lawton, Okla., Hadley was a founding member of the National Intercollegiate Rodeo Association and was that organization’s first steer wrestling champion. Hadley’s announcing career began with a rodeo in Lindsey, Okla. His performance earned him jobs announcing at 10 more rodeos, and he never looked back. During the next 40 years Hadley announced three generations of rodeo cowboys and cowgirls in 33 states and four countries. Along the way he announced the National Finals Rodeo in 1971, 1973, and 1982. Hadley believed public relations efforts were an important part of the package he brought to a rodeo and spent untold hours working with local newspapers, television and radio stations to publicize rodeo. Hadley has been described as the quiet, laid-back type of announcer who works magic. Quite a tribute to a man who answered the association membership application question “Why did you decide to rodeo?” with “To keep from punching cows.” 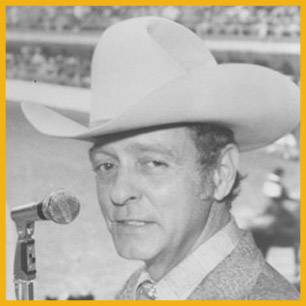