Rob Smets has been among the elite professional bullfighters for many years and with his induction into the ProRodeo Hall of Fame, he will forever be remembered as one of the best in the business.

Starting in 1981, Wrangler Jeans and Shirts began sponsoring the bullfighting competition in which a world champion was crowned each year. Smets, who listed Salinas, California as his hometown, won or shared the award a total of five times. His first title came in 1983, he shared the title with Miles Hare and in 1994 he won his final title.

Smets and his wife, Carla, now make their home in Merkel, Texas, where he spends time speaking to school, church and civic groups and visiting hospitals. He had planned to retire from bullfighting at this year’s Professional Bull Riders Finals in Las Vegas, but on March 3, a bull hooked him, breaking his neck for the third time. His hobbies include team roping, steer roping and spending time with his kids Corey, Josie, Sammy and Dylan. 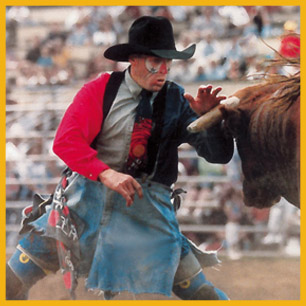