Rex Dunn was selected to work three National Finals Rodeos (1983, 1985-86), two Canadian Finals Rodeos and 13 circuit finals over a 16-year professional bullfighting career in which his deceptively effortless style earned him the nickname “Mr. Smooth.” He twice finished second in the Wrangler Bullfighting standings – making six appearances from 1982-87 – and was voted PRCA Clown of the Year in 1985. Once he stepped out of the arena, Dunn began putting on bullfighting schools and became a fighting-bull stock contractor, creating Coyote Hills Rodeo. He had 138 bulls selected for the NFR bullfighting competition from 1986-2000, including Howdy Doody, the 1997 Fighting Bull of the Year, and two reserve champions. The Professional Bullfighters organization has named an award in his honor, in tribute to his excellence. 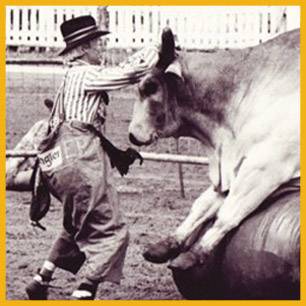