Quail Dobbs always wanted to be a cowboy. When he was required to write a school paper on an admirable person, he chose rodeo icon Jim Shoulders while everyone else in the class selected a movie star. Dobbs, born Aug. 27, 1941, in Albany, Texas, began his rodeo career riding bareback horses and bulls. He found his true calling in 1962 at a Minnesota rodeo when the stock contractor was short a barrelman. Dobbs volunteered and a star was born. Dobbs, a two-time PRCA Clown of the Year and four-time Coors Man in the Can, is one of only three men to work the National Finals Rodeo as both bullfighter and barrelman. He also worked as the Wrangler Bullfight Tour Finals barrelman seven times. In a span of more than three decades, Dobbs worked Cheyenne (Wyo.) Frontier Days 28 times, Southwestern International Livestock Show and Rodeo (El Paso, Texas) 30 times, West Texas Fair & Rodeo (Abilene, Texas) 27 times and RodeoHouston 15 times. Through the years, Dobbs’ co-workers in his various acts included the famous Phyllis, pigs, chickens, mules and his explosive cars named after space missions. The 1998 Cheyenne Frontier Days marked Dobbs’ last performance. He hung up his baggy pants and red polka-dotted shirt for a second career, serving as a justice of the peace in Coahoma, Texas. He says it wasn’t much of a transition, since some judges are already thought of as clowns. 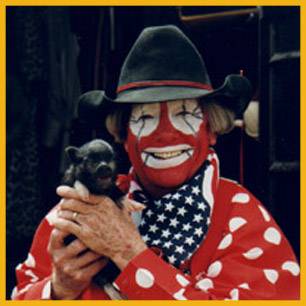