Pete Logan, born Dec. 4, 1915, in Junction, Ill., had been a radio announcer for 10 years when he responded to an ad in Hoof and Horns magazine. The ad read, “Wanted: Announcer for Black Hills Roundup, July 4.” He got the job even though he had never seen a rodeo. That first job led to what Logan conservatively totaled as 30,000 hours behind the microphone. He announced the big ones – Boston Garden, Madison Square Garden (a record 10 times) and the National Finals Rodeo. Logan was chosen with Cy Taillon to announce the first NFR in 1959. He was selected eight times for the event, including 1961, when he handled the job alone. He also was selected to announce the first coast-to-coast live rodeo telecast that originated from San Antonio, a rodeo for which Logan was contracted to work 35 years covering nearly 600 performances. Hollywood beckoned for a while, with Logan playing parts in several Western series and two tailor-made roles – the rodeo announcers in the films Junior Bonner and The Misfits. Logan credited his long-lasting success in rodeo announcing to his years of training and experience in radio. He served on the PRCA Board of Directors from 1957-61. He died Oct. 4, 1993. 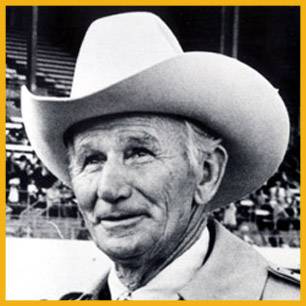