Nancy Sheppard was born to a Western ranching family on Dec. 29, 1929, in Fort Worth, Texas. Her father was a roper and member of the Cowboys’ Turtle Association and her mother began showing horses in the Fort Worth Coliseum as a child. Sheppard made her rodeo debut as a 9-year-old trick rider and roper at the Hayward, Calif., rodeo. By 11 she was performing at the Pendleton (Ore.) Roundup and, by 17, she was trick riding at Madison Square Garden in New York City. For 22 years Sheppard rode and roped at rodeos from coast to coast and worked for some of the best-known stock contractors in the business – Harry Knight, Christensen Brothers, Leo Cremer and Everett Colborn. Her travels around the country afforded her the opportunity to visit and entertain in local hospitals, particularly in the children’s wards. Sheppard is the only woman in ProRodeo to perfect the act of standing on a running horse while spinning two ropes. In the 1950s she served as the contract acts representative to the Rodeo Cowboys Association, a role she took seriously. Long after her retirement from the rodeo arena Sheppard continued to make special appearances trick roping in the Macy’s Thanksgiving Parade and in Italy for clothing designer Giorgio Armani, always traveling in her full Western attire carrying her ropes. 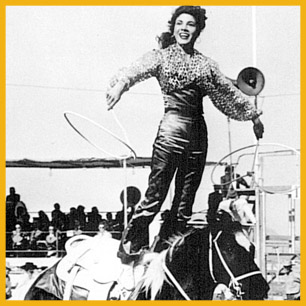