Jimmy Schumacher, born in 1920 in Prescott, Ariz., invented and was the first rodeo barrelman to use the barrel open at both ends. This allowed the clown to move the barrel around while he was inside it. He could approach the bull without depending on the bull to charge or wait until the other bullfighter in the arena brought the bull to him. A contestant in bareback riding and bull riding for 15 years, Schumacher began clowning when traveling with the famous George Mills and worked the barrel for the first time in 1949. Schumacher’s career in the professional rodeo arena lasted for 35 years. He was selected barrelman for the National Finals Rodeo nine times (1960, 1962-69) before his retirement in 1970. Besides being a great innovator, Schumacher was known as “one of the funniest men ever to enter a rodeo arena.” 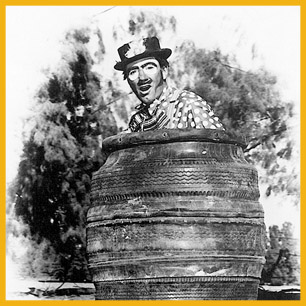