Born Oct. 16, 1925, in Boston, Edith Happy Connelly first traveled West in 1934 and for a number of years alternated spending two years with her father in Boston and two years with her mother in California. Both coasts offered the opportunity for her to pursue her love of equine activities. Then she met trick rider and roper Buck Abbott, who convinced her that Western was better. Connelly began working rodeos as a trick rider in 1943 and spent more than two decades performing at rodeos across the country. Her hippodrome stand was a crowd favorite. Her rodeo career led to work with the Gene Autry show and then to stunt work in Hollywood, where she served as a stunt double for Dorothy Malone, Betty Hutton, Virginia Mayo and Irene Dunn. Connelly may be best known for the second phase of her rodeo career, an administrator and rodeo secretary. The four-time National Finals Rodeo secretary also worked the Golden State Rodeo, the Mesquite (Texas) Championship Rodeo, California Rodeo Salinas and Madison Square Garden in New York. No matter what role she played, it was always with the utmost honesty, integrity and with the best interest of rodeo in mind. Connelly died Feb. 28, 1999. 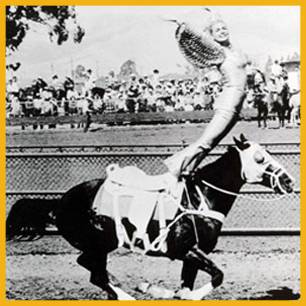