Chuck Henson was born with rodeo blood in his veins. In fact he was born Feb. 4, 1931, in Arcadia, Fla., where his parents were competing at a rodeo. He competed in five different events but considered bull riding his forte. In the mid 1950s he traded his boots and hat for baggy pants and a red wig when his clown/bullfighter career took off. He weekly made people laugh and saved cowboys from disaster until the 1980s. Henson worked the 1967 and 1971 National Finals Rodeo. He served on the association’s Board of Directors as contract member director from 1974-77. When Henson hung up his rodeo clothes, he took on Hollywood as a stuntman double. Of his rodeo career he says, “It made me feel mighty good when some kid who had drawn a bad bull would say, ‘Boy, I’m glad to see you here.’” 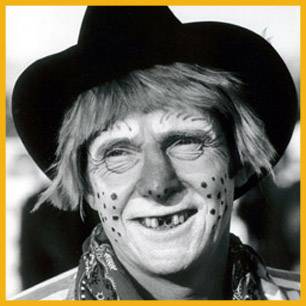