Like many contract performers, Cecil Cornish began his rodeo career riding bucking horses and roping. However, his special ability to train animals and his aptitude for entertaining soon led him to what would be a lifetime of performing as a rodeo specialty act. Born, Sept. 28, 1909, in Waukomis, Okla., Cornish’s most famous act included his trick horse Smoky. His bond with Smoky started when the colt was only 6 months old and continued for some 30 years. Smoky’s act included sitting like a dog, rolling over playing dead and shaking hands. That act thrilled audiences across the country. Other acts featured Danger, the trained Brahma bull who jumped cars (actually three bulls over the course of Cornish’s career, all named Danger), six matched palomino Liberty horses and a Roman riding team. Mr. Rodeo, as Cornish became known, performed with Gene Autry and Roy Rogers and even played a part in the movie Dillinger. He will be remembered for his colorful and elaborate Western outfits, his uncanny ability to train and communicate with his four legged co-stars and his friendships throughout the rodeo community. He died in December 2003. 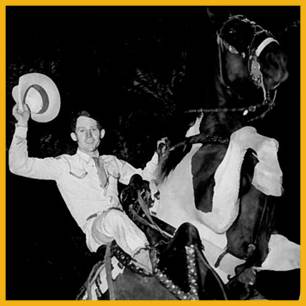