During a career that has spanned more than three decades, Bob Tallman has announced nearly 15,000 rodeo performances in the United States, Mexico, Canada, Australia and New Zealand. His gravel-laced baritone and his story-telling prowess are legendary in ProRodeo. In recent years Tallman has become the voice of the Wrangler National Finals Rodeo. Tallman has announced the Wrangler NFR a record 17 times, including a record nine straight. No one in the history of the Wrangler NFR has announced the rodeo more times. Born Oct. 25, 1947, in Winnemucca, Nev., Tallman tried his hand as a rodeo competitor, but he quickly discovered his forte was behind a microphone, as evidenced by his being named PRCA Announcer of the Year in 1982, 1987, 1997 and 1999-2001. Tallman’s career began in Fallon, Nev., when he told a rodeo producer he thought he could do a better job than the announcer was doing. The producer told him to give it a try. Tallman earned $100 for that first job and has never looked back. Tallman’s philosophy is simple, yet effective. “Tell them the truth,” he said. “Say what you are seeing because the fans are seeing the same thing that you are. And if you can’t be positive, don’t say anything.” 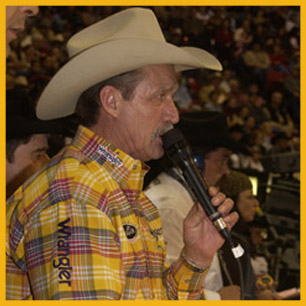