*Inducted as a pair with Vickie Adams.

For parts of five decades, the husband-and-wife team of Leon and Vicki Adams entertained rodeo fans all over the world with their horsemanship, innovative flair and skill in training animals. Leon Adams received the PRCA Specialty Act of the Year Award in 1982, followed two years later by Vicki. They twice won the award together, in 1987 and 1997, and they were nominated for the award 19 consecutive years. Leon learned to Roman ride horses by getting on his father’s work horse to and from the field every day to Stuart, Okla. He got his first paying job in the arena at age 12, made trick riding his career shortly after graduating from high school, and just kept adding to his repertoire. Looking for something truly different, he trained Geronimo and Apache to become the first Brahma bulls to be part of a Roman riding act. He also trained bulls to leap over a Cadillac El Dorado convertible and through fiery hoops. Leon Adams retired from the arena in 2005 and Vicki one year later. 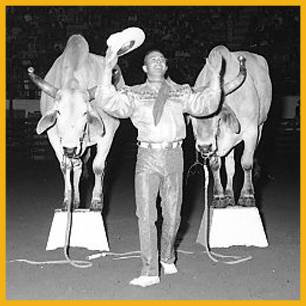