The PRCA Rookie of the Year in 1980, when just a year out of Manteca (Calif.) High School, Ted Nuce competed in his first National Finals Rodeo at 21 and was as consistent as any bull rider of his era. Nuce won the world championship in 1985 and finished as reserve world champion four times, in 1986-88 and 1991, losing the 1987 title to Lane Frost by slightly more than $4,000. Nuce claimed his 1985 gold buckle by scoring a 90-point ride on Ivy’s No. 189 in the last round of the National Finals Rodeo in Las Vegas, pushing aside fellow ProRodeo Hall of Fame inductee Tuff Hedeman. Nuce qualified for the National Finals Rodeo in bull riding a record 14 consecutive years (1982-95) and shares the event record for total appearances (also 14) with Wacey Cathey. He won two gold medallions for the United States in the bull riding and team competitions in the 1988 Winter Olympic Command Performance Rodeo in Calgary, Alberta. 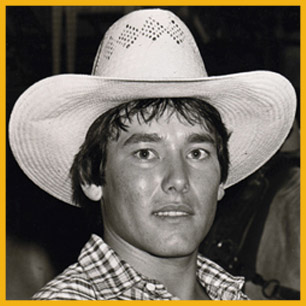