Gary Leffew, the rodeo guru of positive thinking (psycho-cybernetics) born Sept. 23, 1944, in Santa Maria, Calif., was no ordinary bull rider. Instead of climbing on a bull, he could have just as easily ridden off into the sunset on a Harley. One day, he accepted a challenge to ride a bull. Although the bull bucked him off, his rodeo career was born. Leffew, the longhaired, bearded child of the 1960s, cut his hair, bought some steers and young bulls and practiced bull riding every day for a year. By July 1964, Leffew had quit his day job and hit the rodeo trail. His earned the first of his seven National Finals Rodeo appearances in 1966 when he finished 10th in the world standings. Then, he hit a slump and self-doubt set in. Enter the positive-thinking program and his use of visualization techniques that took him to the 1970 world and NFR aggregate titles. Leffew is teaching his techniques to new generations of bull riders – programming them to be champions through his use of visualization, video feedback, good techniques and strength of the mind —  at the Leffew Rodeo School. Leffew’s success in the rodeo arena brought success in movies, television commercials and commercial sponsor contracts and opportunities. No one has worked harder to promote himself, the sport and bull riding than Leffew. 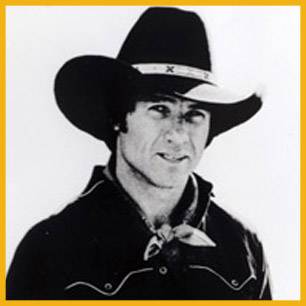