Marvin Garrett told his fourth grade teacher he wanted to be a cowboy when he grew up. To prove it, he began riding steers when he was 12. However, his mother altered the course of history when she said he couldn’t be a bull rider (at age 15) until he could sign his own association permit, but he could ride bareback. “The first one I got on, I knew I was going to do that, and I forgot all about bull riding,” said Garrett, who went on to win four world titles. Rodeo could have lost its champion completely to wrestling. Garrett was all-state and All-American in 1982 and received wrestling scholarship offers from Iowa and North Dakota. North Dakota and Wyoming also offered rodeo scholarships. Garrett, born July 28, 1963, in Belle Fourche, S.D., was named Rookie of the Year in 1984. His 1988 NFR appearance earned him his nickname, “Marvelous Marvin.” Four times he has been the association’s regular season money leader in bareback riding. This million-dollar cowboy has won championships at Houston, San Antonio, the Cow Palace, Pendleton (Ore.) and most everywhere in between. “When I am done, I want to be able to look back and say I’ve done all I can do to make the sport better. I hope I can do that.” Garrett recorded his first 90-point ride over the Fourth of July 2004 on Powder River’s Khadafy Skoal. 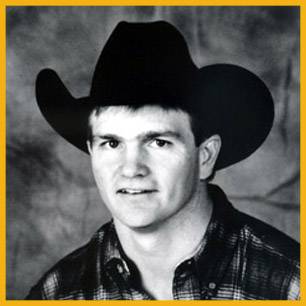