Throughout his long ProRodeo career, Mark Garrett was known for his ability to perform under pressure, and that was never more evident than when he won his only gold buckle with a clutch ride in Round 10 at the 1996 National Finals Rodeo in Las Vegas.

His 83 points on Big Bend Rodeo Company’s Spring Fling – a 2014 inductee into the ProRodeo Hall of Fame – allowed him to win the round, the world title, the NFR average title and set a then-bareback riding record of 786 points on 10 head.

Further evidence of Garrett’s ability to come through on the biggest stages came at the 1996 Dodge National Circuit Finals Rodeo in Pocatello, Idaho, where Garrett won both the semifinal and final rounds of the tournament-style rodeo.

“It’s dang sure an honor to be inducted,” Garrett said. “A lot of your heroes and your friends are in the Hall of Fame, but I sure didn’t plan on joining them. You don’t really count on something like this, but I’m sure happy that it happened. It’s an honor to be mentioned with these guys.” 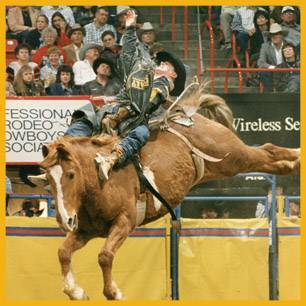