The single world championship won by John Hawkins is one of the most deserved in rodeo history. In steady pursuit of the title, he was runner-up for three consecutive seasons, once missing the crown by only $18. A broken thigh, later mended with a steel rod, kept Hawkins out of rodeo for 18 months. He returned to competition only to bend the rod and re-break the thigh. He left the rod bent and won his only bareback title the following season. Born May 22, 1930, in Elk City, Okla., Hawkins was a Quarter Horse jockey and physical fitness buff long before fitness became fashionable.  Hawkins had one of the strongest riding arms in rodeo. Few rodeo fans remember Hawkins was also a bull rider and tie-down roper during his early years as a RCA competitor. 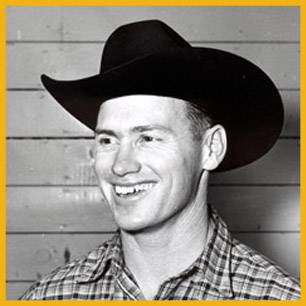