Chuck Logue was a major figure in his era, qualifying for the National Finals Rodeo 11 times in 12 seasons (1982-87, 1989-93), winning the world championship in 1990 and the NFR average title twice (1985 and 1990).   Over the years, Logue earned a reputation for riding best under pressure for big money. Never was that put more to the test than at the 1990 NFR in Las Vegas when he had a long spur ride aboard Ike Sankey’s WindSong for 75 points in the 10th round. He broke a three-way tie for the average lead that allowed him to claim the gold buckle by more than $11,000 over Clint Corey.

He won major titles all over North America, including Fort Worth, Texas; Salinas, California; Houston, Texas; and Calgary, Alberta. Logue and his older brother, Bob, started learning how to rodeo on their family’s Texas ranch when they were about 9 years old and traveled together for much of their careers. 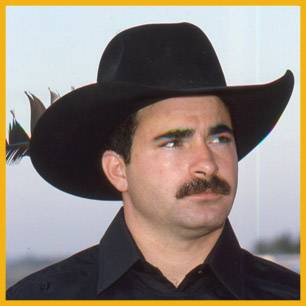