Todd Whatley was a true all-around cowboy, working both ends of the arena. Born in 1920 in Rufe, Okla., his rodeo career began at age 17 when he rode a wild cow at a competition in Battiest, Okla. Ten years later, in 1947, he won the steer wrestling world title and by virtue of winning more money than any other contestant in two or more events, was awarded the first all-around title by the Rodeo Cowboys Association. In 1953, he added another title to his collection with the bull riding world title. Throughout his career, Whatley won titles at all the major rodeos, including Cheyenne (1945 bull riding title), Phoenix (1948 steer wrestling and 1952 bull riding champion) and Houston (1947 and 1952 steer wrestling and 1952 bareback riding titles). Whatley served on the Board of Directors as the bull riding representative from 1952-57. After retiring from competition in 1956, he divided his time between running his ranch and working as a rodeo judge. He died June 17, 1966. 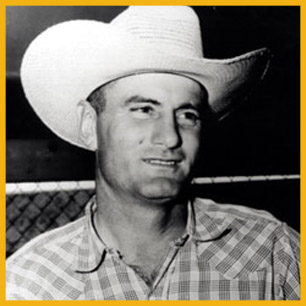