Jimmie Cooper epitomizes the cowboy way of honesty, hard work and honor. Cooper filled his Professional Rodeo Cowboy Association permit at his first professional rodeo. As the most-talked-about contestant in 1980, Cooper earned that year’s Overall PRCA Rookie of the Year title, as well as Rookie of the Year for tie-down roping and steer wrestling. He followed those feats with the ultimate cowboy crown as the 1981 World Champion All-Around Cowboy.

Cooper competed in team roping, tie-down roping and steer wrestling, and is one of only a dozen cowboys to qualify for the Nation Finals Rodeo in three different events. He roped calves at the NFR seven consecutive years, from 1980-1986, bulldogged four times at the Finals from 1980-83, winning the Wrangler NFR steer wrestling average in 1983, and competed in team roping at three consecutive NFRs from 1984-86.

With the birth of his children, Cooper decided that the rodeo road didn’t need him as much as his family did, and in the prime of his rodeo career decided to stop competing full time. Cooper, his wife, Shryl, and their children, daughter Jill, and 2004 Team Roping Rookies of the Year twins Jake and Jim, call Monument, N.M., home. 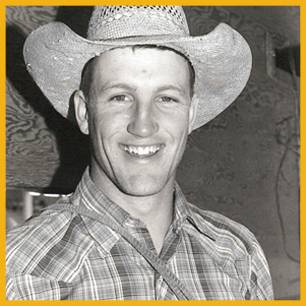