Clay Carr won five world titles while competing in roughstock and timed events. His versatility came from working on the family-owned Gill Ranches in California. A cowboy born to the saddle and rope, Carr was a natural athlete who competed in saddle bronc riding, steer roping, steer wrestling, team roping and tie-down roping during an illustrious career that spanned 25 years. Carr, born April 17, 1909, in Farmersville, Calif., traveled widely during his rodeo career, competing in Australia and England, as well as throughout North America. Upon his death in Visalia, Calif., in April 1957, the citizens of his hometown voted him the all-time greatest athlete of that area. 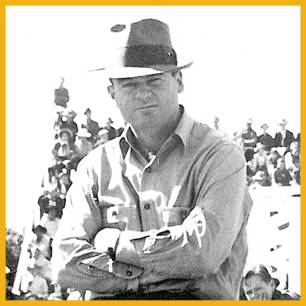