Chuck Sheppard, born April 16, 1916, in Globe, Ariz., went to his first rodeo at 16. “I won some money, had fun doing it and I think that’s what amazed me so much.” From that point on Sheppard’s life revolved around rodeo. He grew up a cowboy, both as a rider of tough horses and a roper of wild cattle – skills that would provide his livelihood for several years. He won a world championship in team roping in 1946. Sheppard has been called the toughest four-event man there ever was. He excelled at both ends of the arena, riding broncs, as well as roping calves, wrestling steers and team roping. He won tie-down roping championships at Pendleton (Ore.), Denver and Portland (Ore.); all around titles at Denver, Lewiston (Idaho), Boise (Idaho) and Hayward (Calif.); and saddle bronc titles at Salinas (Calif.), Tucson (Ariz.) and Chicago. Sheppard’s rodeo involvement went beyond that of a competitor, serving 10 years on the RCA Board of Directors as team roping representative and always answering the call when the Association, the National Finals Rodeo or the National Finals Steer Roping needed assistance of any kind. Sheppard quit competing full time in 1959 to manage the horse breeding and training programs at the K-4 Ranches in Prescott, Ariz. However, team ropers never really retire and in 1998, at the age of 82, Sheppard took home $6,000 and a saddle from a Prescott roping. 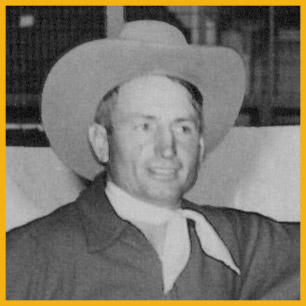